Secure your spot and get started today with our EXCLUSIVE offer!

By opting into the web form above you are providing consent for Championship Martial Arts to send you periodic text messages. Standard rates may apply. You can reply HELP at anytime or learn more. You may opt-out anytime by replying STOP.
ACCESS OUR SCHEDULE
& EXCLUSIVE WEB SPECIAL

Secure your spot and get started today with our EXCLUSIVE offer!

By opting into the web form above you are providing consent for Championship Martial Arts to send you periodic text messages. Standard rates may apply. You can reply HELP at anytime or learn more. You may opt-out anytime by replying STOP. 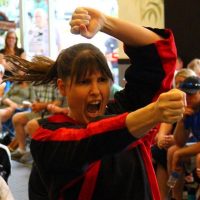 I have been attending adult classes here for just over a year and have nothing but great things to say about this dojo. The instructors are knowledgeable and the atmosphere is upbeat. I started classes thinking I was too out of shape but was never treated like I shouldn't be there. Shihan Jenny pushes us to work hard but also pushes us to have fun. If you want to get in shape, learn karate, and hang out with a fun group of adult students then this is the dojo for you!

My daughter has been going to Championship Martial Arts-Cary for just over a year now. It was the best decision we've made signing her up for classes here. Her confidence has really soared since beginning karate. Shihan Jenny and all of the instructors are awesome! It really feels like a family here 💜

We just started attending Championship Martial Arts, but the experience has been great so far. My son really enjoys the classes and it is a delight to see him while in class. He is four years old and his classmates are in that age range. It is hard to believe how focused a group of little kids can be given the correct direction. I think this will really help my son focus and create some discipline at this early age.

I am so impressed by the program here and the instructors for the little ninjas class! It’s an affordable, fun way for the kids to learn respect, discipline, self-control and obedience. Christopher is an excellent teacher and has a natural ability to keep the kids interested and focused.

CMA has been absolutely amazing for my son. The atmosphere and nurturing, yet challenging instructors have instilled pride, confidence, discipline, and fitness. Shihan Jenny and her team are second to none; they are phenomenal coaches, teachers, and masters of the craft-and make each session challenging and super fun at the same time! I recommend this experience to anyone from “little” to full-fledged Ninja!!

My 12 yo son has been taking karate at CMA for almost 2 years now and I've seen tremendous growth in his attitude, confidence and maturity. He loves going to class and I love seeing him so excited to learn and refine his skills each week.

The team of instructors at CMA are unmatched! I haven't seen a group of educators who know more about martial arts and child development. The first day that we stepped foot in their door, I was so nervous because nobody had ever been able to reach my child before. He was always anxious and had never found an activity that he actually WANTED to participate in. He told me that he was not going to participate-only watch. We arrived and in less than 30 seconds, Shihan Jenny had him participating with the group AND he was enjoying it!
CMA has given my child such confidence. He has developed much better body control and awareness. He now tries to make up his own "forms" and teaches us every night. I cried from happiness the other day because he was so excited about going to his karate class. We have found something that he loves and has a passion for. I'm so grateful that we found this place and cannot recommend them enough!

I absolutely love this place. My son has been attending this dojo for almost a year now. All of the children are taught positive attributes such as courage, courtesy, and confidence and they all resonate with encouragement for others and respect for their parents and staff. I also attend personal training here and have been so impressed with how wonderful the whole CMA family is!

Shihan Jenny and her team of instructors help you dig deep to bring out your personal best, no matter your age. My daughter has been taking classes for 3 years and I've been there just over a year, our balance, coordination, health and confidence have improved dramatically. Karate is a great way to stay fit, and Championship Martial Arts, Cary is the best place for it!

Championship Martial Arts is amazing! My two boys, now five and seven, have been enrolled in classes since they were three and a half years old. The instructors are highly skilled and Shihan Jenny is phenomenal with the students. Classes are structured, instructors are patient, knowledgeable, and enthusiastic. We had several birthday parties at the dojo as well--and the boys loved it! My older son is taking classes almost daily and he would take multiple classes every day (he enjoys the classes that much!) Shihan Jenny has a way to motivate students to do their best and excel to their fullest potential. The integration of character traits into the karate curriculum is also impressive as the "Lesson of the Month" provides key life skills. I highly recommend Championship Martial Arts to anyone who is interested in the highest quality karate instruction available.

I love this Dojo! The instructors are knowledgeable, patient and encouraging to all students. I feel very fortunate to be in the happy circumstance of being in the vicinity of such an excellent Karate school when I was looking for a place for my son. He absolutely loves it and I could not have asked for better. My father who studied Martial arts for over 40 years watched the instruction and students one time and gave Shihan Jenny the highest praise I have ever heard pass his lips. If you are looking for the best, look no further.

A fantastic, supportive, and focused environment. From the instructor, Shihan Jenny, down to the younger instructors, the staff is well trained and equipped to handle all ages. A great experience in learning self defense, confidence and training for the body and mind. Reasonable costs and well worth the time in seeing the classes teach sportsmanship and a valuable skill.

CMA is an amazing dojo. Shihan Jenny and the instructors are highly skilled and very good with kids. The students are pushed to reach their goals while having fun. It's a great environment where your child will learn respect, self discipline and confidence. I highly recommend Championship Martial Arts Cary.

CMA , Can't say enough good things about CMA and Shihan Jenny and Sensei Chris for helping my son Sensei Christopher grow and develop into the awesome young man that he is at almost 18 years old now. I am so proud of his work ethic, integrity, helpfulness, respectfulness, and humbleness that I know has come from him being partly at CMA and from you working with him for nearly 8 or 9 years now. I cannot thank you both enough for your guidance and friendship as Christopher has had to deal with a lot of difficult times during these years. My hope is he will always continue to be able to call on you as friends and to continue his karate as long as he feels it's a support to him. Thank you so much.

Shihan, Sempai’s and the other instructors and staff are great. Very quickly became a part of our family. Work very well with people from all ages (kids to adults). My 6 year old started when he was 5 and I have seen a much bigger difference in self control and respect. I too (along with my wife) joined as well and love it. I’m involved in several classes. Learn all types of techniques... from karate basics, self defense, katas to bushudo; and gets more challenging to push yourself in a non pressured way unlike other other dojos I have attended in my past or witnessed... not that CMA go easy on you AT ALL but they understand thresholds and capability and build from there and find what works best for you while still learning the tools you need to get you where you need to be. great in school tourneys, good for mind, body, and soul and a very positive atmosphere. Has helped my body recover from Medicsl issues as well as focusing my mind to get out of the day to day hassle we all deal with. Great release for stress, exercise, self defense and family atmosphere

I looked around quite a bit for a good karate studio for my son - we were looking for strength and decency, not just fighting. Most of the places I found were way more Cobra Kai than Mr. Miyagi, but one day we stopped in to the place beside our grocery store and found Championship Martial Arts. From the owner to the younger instructors, we found kind but serious, friendly but tough people that push my son in appropriate ways and require a lot from him - and he loves it. We also found a community of parents and long term students that is supportive and helpful. I wouldn't want to send my son anywhere else. I've often told people that if my kid ends up anything like the student instructors that are long term products of that program, that's okay with me.

What Martial Arts Are

Martial arts are an ancient practice from Asia. They were originally meant for self-defense. Today, lots of people practice martial arts as a way to build physical and mental strength.

There are many different forms of martial arts. Some—like karate and tae kwon do—focus on striking and blocking. Others—like judo and jiu-jitsu—focus on wrestling and grappling. All use deliberate and repetitive motions and emphasize the connection between mind and body.

Many parents believe the benefits of martial arts are more than just physical for their kids. They say martial arts can help to improve kids’ self-control, attention and other executive functioning skills.

There is some research supporting this, says Kimberley D. Lakes, Ph.D., of the Pediatric Exercise and Genomics Research Center at the University of California, Irvine. However, she warns, most studies have been done on schoolchildren in the general population. Few have focused on kids with learning and attention issues.

There’s also no solid evidence showing that martial arts can be a substitute for medication and other treatments for learning and attention issues.

What Martial Arts Can Offer Kids With Learning and Attention Issues

There are lots of reasons martial arts can be a good match for kids with learning and attention issues. Here are nine potential benefits: